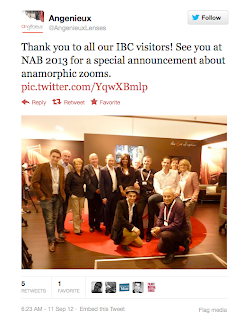 Yes, it is true! After IBC 2012, in the fashion of a gossipy 14 year old girl, Angeniuex launched a vague yet attention grabbing tweet deep into the twitter-sphere, ensuring a tease to any glass head. Angeniuex announced an announcement at NAB 2013 regarding anamorphic zooms. I am going to take this time to announce that when they make their announcement, I will be announcing how I feel about said announcement on this blog.

This was so like that time when Jessica tweeted about how she was thinking about possibly considering going with Hunter to the spring formal.

Not to be outdone in the uninformative, vague, yet buzz-building category, Cooke took the more traditional approach to making their anamorphic intentions known. They sent a friend. According to Cooke/ZGC friend, author, and self-publisher Jon Fauer, A.S.C., reliable sources have told him Cooke is developing their own line of Anamorphic prime lenses.

This is even better than that time Jessica sent her friend Beth to tell David that Jessica wanted to know if Hunter was going to ask her to the spring formal.


Despite lack of photographs, prototypes, 3D renderings, artist sketches, or even just a list of technical specs or timeline, it's good to know anamorphics are on the mind of these lens making masters.

Either way, the anamorphic market has long been dominated by Panavision, Hawk and other vintage sets. It's good to see some options coming from Cooke, Angie, and Zeiss. And despite being a HUGE Cooke fan, I am perhaps more excited to hear about anamorphic zooms. If there has ever been just one class of lenses that has been completely under serviced, it would be anamorphic zooms.