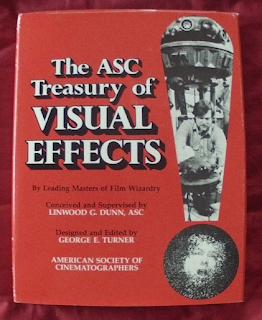 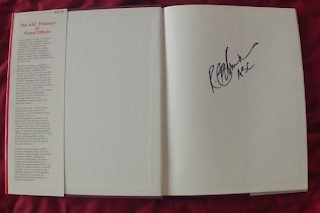 Went to the ASC clubhouse for a meeting with two of the talented folks at the American Cinematographer magazine and they invited me to attend an ASC Breakfast Club presentation being held earlier in the morning by visual effects legend Richard Edlund, A.S.C.

I, of course, did not turn down the opportunity to go and as I was heading for the door I had a strange feeling. I walked over to my bookshelf, and for good measure decided to grab my copy of 'The ASC Treasury of Visual Effects' from my bookshelf. It just felt appropriate.  Little did I know, as soon as I arrived at the clubhouse and met my contact Saul, circulation director of AC,  he pulled out a stack of books and walked straight over to Richard to have him sign some books which would later be put up for sale. When I looked down at the stack of books, I was shocked to see they were all new prints of 'The ASC Treasury of Visual Effects!' 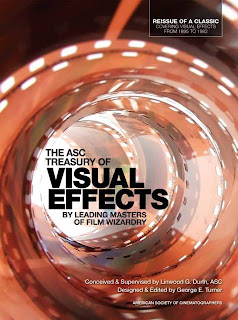 I could not believe it. I quickly said, "oh, cool! I brought my own copy" as I pulled out the vintage first printing of the book from 1983. Saul and Richard were shocked and impressed to find I had brought along an original copy of the book.

If you had not noticed, Richard Edlund is actually pictured on the original cover, working in front of (and on) a model of an Imperial probe droid from The Empire Strikes Back.

If you don't know who he is, Richard Edlund is a visual effects master who has worked on such films as Star Wars, Empire Strikes Back, Return of the Jedi, Indiana Jones, Close Encounters, Ghost Busters, and many more. He basically helped launch Industrial Light and Magic and later, Boss Films. Did I mention he is a multi-Academy Award winner?